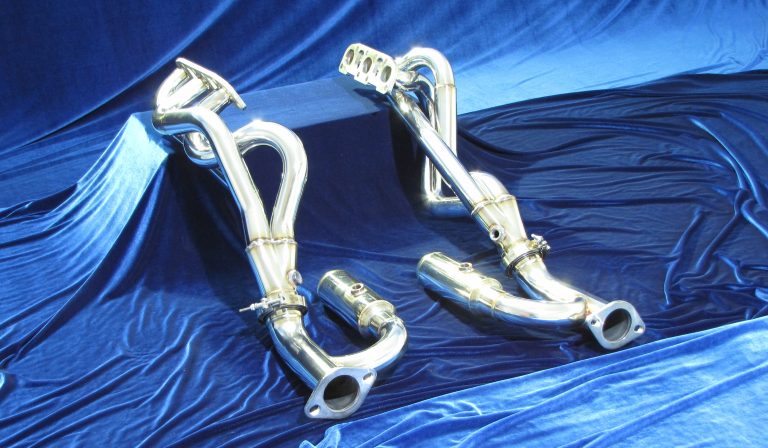 Scavenging occurs due to the cyclic nature of exhaust pulses in an engine.  In a four-stroke engine the fourth stroke is the exhaust stroke, where the exhaust valve opens, and the cylinder pushes the exhaust gases out.  These gases form pulses that are high speed and high pressure.  Once the exhaust valve is closed the pressure behind the pulse drops quickly and even goes below atmospheric, creating a vacuum.  If the timing is controlled just right, this vacuum will hit the next exhaust valve and suction the air out of the cylinder, relying less on the power of the engine to push the air out.  During valve overlap, the vacuum can also allow for more fresh air to be pulled in.

See the video below to visualize the scavenging effect in a fluid simulation from the article Transient Analysis of Exhaust Headers Using Computational Fluid Dynamics in Solidworks Flow Simulation.

The back-pressure myth probably started with the misinterpretation of test results.  Someone probably did a series of experiments with variable exhaust pipe diameter and found that smaller diameter pipes yielded higher HP and TQ.  This performance uplift was interpreted as increasing back pressure, and they published their results.  However, these smaller pipes actually increased scavenging.  The smaller diameter pipes are only desirable when they are close to the engine, since the effect of scavenging rapidly diminishes as the pipes move farther away from the engine.  Thus, once far enough away from the engine small and restrictive pipes must be avoided since they will not benefit scavenging.

Motordyne Engineering conducted a series of experiments to find the most beneficial diameter pipe at every stage of the exhaust.  These experiments were conducted on a naturally aspirated (NA) engine.

The first series of experiments varies the diameter of VQ test pipes ranging from 2.00”, 2.25” and 2.50”.  The initial hypothesis was that the largest diameter would produce the highest HP and lowest TQ.  Likewise, the 2.00” pipes would have the lowest HP and the highest TQ.  However, the dyno results showed that this hypothesis was half correct.  The TQ guesses were correct: the 2.50” test pipe had the lowest TQ and the 2.00” test pipe had the highest TQ.   The dyno showed that the 2.00” test pipes made approximately  1 more HP than the 2.25″ and 2 more HP than the 2.5” test pipes.  Thus 2.25” will yield good NA results while leaving significant headroom for medium boost turbo applications.

The results here show that the smaller pipe near the engine did increase performance,  since it did indeed increase scavenging.  Smaller diameter pipes near the engine increase the velocity of the pressure pulse and thereby increasing the effect of scavenging from a longer and lower pressure after the pulse.

The next experiment took place at the mid-pipe.  The mid-pipe was varied in diameter to 2.50”, 3.00” and a fully open Y-Pipe.  The dyno testing showed that there was no scavenging effect possible after the Y-pipe.  There was nothing to gain from the smaller diameter.  The only thing that had any effect was simple back pressure.  Using an open Y-pipe as the baseline the  3.00″ single exhaust had no effect on TQ and had only a small 1.5 HP decrease.  The 2.50″ mid-pipe slightly reduced TQ and was approximately 4 HP lower than the open Y-pipe.

The final experiment was to decrease the exhaust back pressure further than the simple open ended 3.00” pipe.   A 6″ diameter parabolic diffuser (megaphone) was clamped onto the end of the Y-pipe.  This was used to decrease flow resistance below that of an open pipe.  Dyno tests, see below, show the diffuser produced an instant 4-6HP increase over that of an open Y-pipe.  While there are rapidly diminishing returns with going to larger and larger diameter tubing after the Y-pipe, significant gains can still be made by use of a diffuser.

To get an idea of how a diffuser works you need to consider the kinetic energy being pumped out of the exhaust tail pipe.  For a normal exhaust system that uses 3″ tubing and a sudden expansion to a 4″ or 5″ tip, all the exhaust flow energy is wasted by shooting out all that exhaust gas at high velocity into the atmosphere.  If you have ever stood ~20 feet behind a car on the dyno you will see and feel the effects of all that energy being wasted.  It would be like getting blasted by wind on a hot smoggy day.  All that wind is being blasted out of a 3″ tube.  It takes energy to move all that hot air with such force in such a tiny opening and it is all just wasted energy.  However, by connecting a 5″ diffuser to a 3″ exhaust tube, the exhaust gas velocity will be slowed down by a factor of almost 3X.  Pressure drop is determined by ρV2/2g. In this case ρ and 2g remain constant and V2 is the decreased by 3x with a diffuser, thereby  making the pressure drop decreased by the square of this: 9x.

For a diffuser to be efficient, it must be designed with the proper expansion ratio and diffusion angle. See the diffuser cone above.  If you were to take a common 5″ exhaust tip and bolt it onto a 3″ pipe, it will not work.   A regular exhaust tip has what is called a sudden expansion, because its length is so short.  A sudden expansion is unable to efficiently convert kinetic energy into static pressure.  It just dumps it into the atmosphere and wastes the energy.  But a diffuser organizes the flow and gradually and efficiently slows it down so that the most kinetic energy is conserved.  The engine is still pumping out a lot of exhaust gas, but a diffuser makes it a lot easier to do.

A wide range of testing was performed on a range of different diameters and lengths of exhaust pipes in varying locations of the exhaust system.   All of these tests demonstrated different ways of changing exhaust pulse scavenging and backpressure.  In all cases the results show scavenging is beneficial and back pressure is detrimental to engine performance.  Engine performance can be maximized by utilizing a continually expanding exhaust system design with the smallest (optimally sized) pipes closest to the engine and progressively expanding to larger and larger diameter pipes as the flow moves away from the engine.

1 thought on “Scavenging and the Exhaust Backpressure Myth”